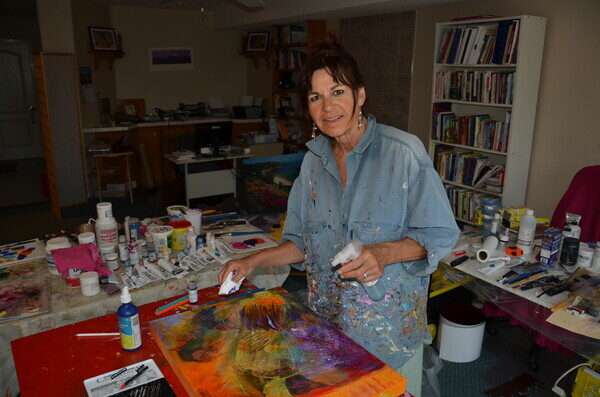 Marlise has been painting since she was a little girl, growing up with a father who was a painter and sculptor in Switzerland (Werner Witschi).

In 1980, Marlise emigrated to the French community of Montreal, where she led her own groups in Body Awareness and Creative Expression through movement, painting and writing. At that time, she painted large format with Latex, mainly as a means of self-expression and healing.

Her interest in the human psyche also lead her to become a Clinical Psychologist in 1991.

Since 2007 she has been taking Painting Courses and Retreats (see below under STUDIES) and made painting her main focus. Her paintings can convey an energy which puts the viewer in touch with their own Essence of peace and stillness, which is very healing..

In 2016 she moved with her husband to Vernon, BC. She spends the winters in Cozumel, Mexico, which inspires her art to be even more free and spontaneous.

Her paintings are expressions of this freedom and spontaneity. She loves to convey a sense of permissiveness to the viewer: Permissiveness to be who you are - regardless. The ordinary and the extraordinary are all included in Life.

Marlise's way of painting is like a dance of call and response. First, there is a ‘stepping out of the way’ and letting ‘it’ come through; a spontaneous movement, and then the response is the choice of whatever is perceived and felt in that moment. It’s a process of listening and following, in a very attentive way. The result are diverse expressions of the play between Light and darkness.

Marlise inspires the viewer to realize that they are equally an Artist, in that they are free to see and interpret whatever they want, in any painting, at any moment. Thus, the act of creation takes place as much in the viewer as in the painter – there is no difference.

Based on this same principle that ‘perception is projection’, Marlise’s message is that we all create our own world with our perception, and that we are free to choose what we want to see; free to choose how we want to look at any person, situation and event. We are all the creators, the painters, of our own life. It is this freedom and empowerment which Marlise loves to share with her paintings.

As an ultimate vision, Marlise would love for the viewer to have an experience of their own light, joy and greatness – the infinite consciousness that we are.

Marlise learned most of her skills from her father, with whom she painted as a child. She also has taken several Courses offered by Signature Members of the FCA, such as Suzanne Northcott, Janice Robertson and Barry Rafuse. In July 2014 she got accepted to spend two weeks in an Artist Residency at the Mechosin International School for the Arts, MISSA, Victoria, BC, which was led by Suzanne Northcott. In August 2015, she spent a week of painting under the instruction of Todd Clark, Gibsons, BC.  In December 2017 she took a week long painting Intensive with  Nicholas Wilton in Sayulita, Mexico. From February to May 2018, she took a 3 month Intensive Painting Course, also with Nicholas Wilton.

Marlise is  an active member of the Federation of Canadian Artists (FCA) and of the North Okanagan Chapter of the FCA (NOFCA).